For some countries, planning out the future is mandatory; it’s about being prepared for what is to come and not being uncertain about the future. However there are countries who take a different approach to the unknown. Some countries choose to go with the flow, taking it one day at a time. These concepts fall under the uncertainty avoidance dimension. 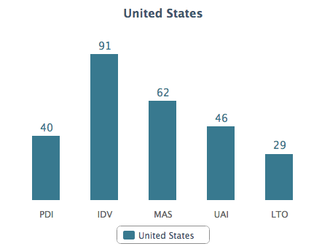 The U.S. Constitution Bill of Rights is a great example of why The United States is considered to have a low uncertainty avoidance. The Constitution guides American law. Most American's stay true to the law and do not try to innovate a new Constitution; however it has been amended over time. One of the most valued right in America is Amendment l; which states, "Congress shall make no law respecting an establishment of religion, or prohibiting the free exercise thereof; or abridging the freedom of speech, or of the press; or the right of the people peaceably to assemble, and to petition the Government for a redress of grievances" (The Charters of Freedom). Americans value to right to be free with their thoughts and opinions. Although they have rules, it is more important to value acceptance of differences and change than it is to abide by one, traditional law.

For The United States, rules are important but are not always followed or required. The U.S. adapts to differ views and incorporate others ideas and opinions into their decisions and experience. This is much different than Saudi Arabia. Where American’s see innovation, Saudi’s view it has a sign of disrespect when codes are not met. Saudi Arabians are not comfortable with uncertainty. Therefore, Saudi Arabia has a high uncertainty avoidance. 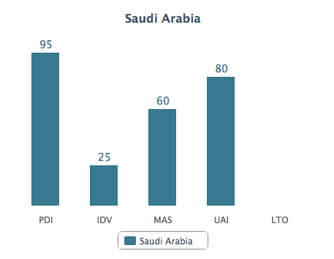 Saudi Arabia scores 80 in uncertainty avoidance; therefore they hold strong codes of belief and are more likely to control the future. Hofstede States, "this ambiguity brings with it anxiety and different cultures have learnt to deal with this anxiety in different ways. The extent to which the members of a culture feel threaten by ambiguous or unknown situations and have created beliefs and institutions that try to avoid these is reflected in the UAI score".Therefore, Saudi Arabia tries to avoid uncertainty in any way they can. They deal with this anxiety through strict rules and beliefs .


Saudi Arabia has a need for rules. The country see “time is money”. Their culture has an urge to be busy and work hard. Situations that seem unclear can be uncomfortable; however because of their strong beliefs they find comfort. Overall, their scores “ indicates the society’s low level of tolerance for uncertainty. In an effort to minimize or reduce this level of uncertainty, strict rules, laws, policies, and regulations are adopted and implemented. The ultimate goal of these populations is to control everything in order to eliminate or avoid the unexpected. As a result of this high Uncertainty Avoidance characteristic, the society does not readily accept change and is very risk adverse” (Butler).  Rule and traditions are very important to them. Saudi Arabia holds religion, behavior, communications, and appearance very high. These areas are highlighted in order to be used as examples of Saudi Arabia's high uncertainty avoidance.

The dominate religion in Saudi Arabia is Islam (Muslim) ; which means peace, love and complete submission and obedience to God. Within their religion, Saudis follow their way of life strictly and obey the laws of the Holy Quran, given to the Muslims by God himself. When Muslims greet each other, they do not say “hey” or “good-morning” like most Americans, they say “ Assalamo Alaikum”; which means “May peace be upon you and may God’s blessing be with you”. This greeting is an action they view as spreading love and peace wherever they go.

Another way they spread love and peace is through their prayer; which is done five times a day. They pray, “Oh God! You are Peace and from you, is Peace; Blessed are you, O Lord of Majesty and Bounty.” Prayer is taken very seriously. It comes before all other things within the day. Whether at work or at home, Muslims stop during the day to pray to God. It is not uncommon for a host of guest to stop a conversation and leave in order to pray. This action may seem disrespectful to most Americans but to Saudis it is a way of life; a way of spreading the peace and love.

Having Islam be the dominate religion in Saudi Arabia is a prime example on why they hold a high uncertainty avoidance. They base their days off of a solid foundation of what should be a priority-such as prayer done five times daily- and what should be reflected upon their character- such as the spreading of love and peace. Saudi Arabia holds their dominate religion as a way of avoiding the unknown. Having routine within their day makes them comfortable and familiar with what is and will happen.

When it comes to Saudi behavior and communication, rules are key in order to show respect; which is a very high value within their culture. To show respect one normally removes their shoes before entering a building while following the lead of the host. When greeting, men shake hands with other men. A more traditional way for men to greet each other involves grasping each other’s right hand and placing their left hand on the other’s shoulder and then kissing each other on the cheek. During conversation and greeting, women do not show eye contact. This action demonstrates respect. However in The United States, this action is not showing respect but disrecept. This is one of many comparisons to high and low uncertainty avoidance.  In addition to this, women are not permitted to drive. In Saudi Arabia, alcohol and pork are illegal; they are considered unclean. Feet are also considered unclean. Therefore it is very disrespectful to show the bottom of your feet when crossing your legs when sitting.

Communication among Saudis shows high uncertainty avoidance as well. How one communicates reflects the power and respect of other individuals. For example, while in a meeting the person asking questions is most likely the person with least importance. The leader is normally a silent observer. While at a host house, the host may interrupt the conversation and leave the room for 15-20 minutes for the purpose of his daily prayers. Communication in Saudi Arabia is at a slow pace. Different from the fast paced culture of The United States, Saud Arabia bases their communication off of building relationships. Within their conversations  there is no obligation to speak during periods of silence.

Both Saudi behavior and communication codes demonstrates why Saudi Arabia has a high uncertainty avoidance. Through their behavior and communication they try to control everything in order to eliminate the unexpected. Saudi Arabia tries to reduce the level of uncertainty by enforcing strict rules, policies and regulations. Through their actions they try to comfort themselves with knowing how one should act. This brings hope that good things will happen because of good actions being made.

In addition to religion, behavior and communication, Saudi Arabia has rules to follow when it comes to one’s appearance. These rules include:
This reflects how Saudi Arabia maintains high uncertainty avoidance. They practice following this dress code and find it unorthodox or inappropriate to rebel against them. All of their rules create an understanding for them to what the future may hold; a future of respect and modesty. Having dress codes within their culture reflects how they do not often go with the flow but rather enjoy knowing what should happen.

Uncertainty Avoidance Difference in the Workplace

Compared to the United States, Saudi Arabia is viewed as close minded. Saudi People try to avoid the unknown. This concept can be applied to the business world. The employees in Saudi Arabia do not adapt well with change in the company procedures. However an American company employees enjoy change and adapt quickly to newness. In this same way, Saudis are more emotional than Americans. Because of Saudi’s strong purpose to spread love and peace, Saudis work devotedly for their managers; whom they have a good relationship with. On the other hand, American’s focus on the work itself. Relations are minimal in the workplace; it is all about getting ahead. They do not let the relationship between them and their managers strongly effect their work. A final comparison within the uncertainty avoidance of Saudi Arabia and The United States is the rules. For Saudis, work is base on rules. Rules help them come to work on time and leave on time, and achieve what needs to get done. American employees prefer less rule and more freedom to work as they wish.

Another disadvantage foreign investors may have with Saudi Arabia may come with their rigid structures and preference for extensive written rules. When it comes to investment, ideas and opinions are shared. However, for Saudi Arabia ideas and opinions are generally shut down do to fully relying on rules. Feelings of what is different can be viewed as dangerous for Saudis. Because of Saudi Arabia’s high uncertainty avoidance, investing with countries-such as The United States- who have low uncertainty avoidance may be difficult. 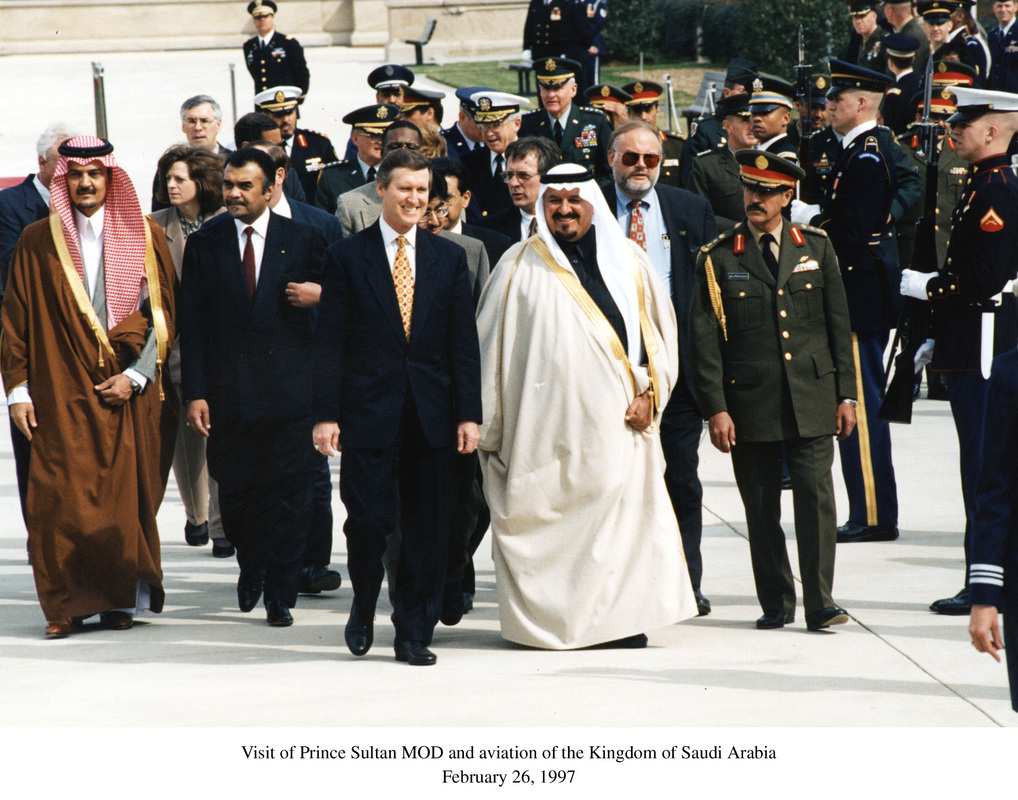 Bill of Rights (n.d.). In The Charters of Freedom. Retrieved December 12, 2012, from http://www.archives.gov/exhibits/charters/bill_of_rights_transcript.html

The Difference Between Saudi Society and American Society (n.d.). In AE2. Retrieved December 11, 2012, from http://ceslae2.blogspot.com/2008/09/differences-between-saudi-society-and_13.html