Do's and Don't's of Communication with Saudi Arabia
Taboos, What's Not Questioned, Veracity, and Humor
By Chris Ray 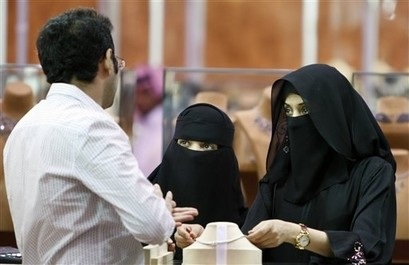 In every culture, language is used as a primary mode of communication, and within language, there are aspects that are unique to certain cultures.  There are different taboos, norms, levels of veracity, and uses of humor in each culture, and being able to understand these difference is extremely important to intercultural communication.  According to to Martin, Nakayama, and Flores in Readings in Intercultural Communication, "Language can serve to strengthen community and cultural identity; it can also be a source of misunderstanding and an obstacle in intercultural interaction."

Throughout the semester, our class has been asked to talk on a weekly basis with students from Effat University in Saudi Arabia.  Through these interactions, we have been able to learn more about the cultural aspects of their country, as well as the communication rituals of their language and interaction.  Learning that Saudi Arabia was a particularly conservative, high-context culture, I thought the students would be quiet and somewhat difficult to talk with.  Additionally, because the students were women of Saudi Arabia, I wondered if they would outgoing enough to divulge information about their culture.  These preconceived notions were immediately shattered, as I learned that the students at Effat University are similar to me in many ways.  Yet, I still recognized the differences in our language, actions, and lifestyle.  In this section, I will discuss the taboos, norms (what is and is not questioned), veracity, and humor of Saudi Arabian language and communication.

According to Merriam-Webster's Dictionary, a taboo is "something that is not acceptable to talk about or do."  In cultures all around the world, topics like "sex," "politics," and "religion" are identified as taboo topics of conversation.  People are often uncomfortable talking about their sex lives, political views, or religious beliefs with people whom they do not know on a personal level.  As in most cultures, small talk happens all the time.  In America, small talk occurs on a daily basis, and most American small talk tends to be about the weather, traffic, or the surrounding environment of the conversation.  Only after this initial small-talk occurs does a speaker move on to more "risky" and personal topics such as family life, relationships, and current events (with the possibility of touching on political or religious beliefs).  Reaching those more personal topics of conversation can be obstacles to intercultural communication.  Because these language topics are frowned upon in certain cultures, oftentimes the communicator will be turned away or disrespected in some sense by the native-speaker.  It is essential to recognize any potential taboo topics before communicating with different cultures.

Specific topics that are taboo in Saudi Arabia are marital relations, rape, and domestic violence.  It is considered highly taboo to ask a Saudi how their family, specifically female members, is, whereas that is common in everyday conversation in America.  When talking with Shoaa Bamashmoos and Rida Khalid, we discussed some of these taboo subjects.  However, because these talks were for our intercultural communication classes, the topics were less taboo than if I were to approach someone in the streets of a Saudi Arabian city.  Because I had gained their trust, in a sense, and knew them on a more personal level, we were able to discuss these taboo topics without questioning each other.  The communication was two-ways, as they asked me about my religious practices, relationship status, and the like.

Ironically, some American television programs are exposing Arabs to taboo topics and causing them to discuss these topics in a more positive manner.
Aside from verbal taboos, there are also some non-verbal communication taboos in Saudi Arabia.  Because a person's foot is seen as the lowliest part of one's body, it is highly offensive to point one's toe or foot at someone, or to use one's foot to move an object.  Therefore, crossing your legs or putting feet up on a table, practices that are common in America, would be seen as offensive in Saudi Arabia.  The clothing that people wear can be seen as taboo, as women are expected to be reserved and conservative, with shoulders, legs, and other parts of the body covered.  These non-verbal cues will be discussed more in-depth in Section IV: Communication Symbolism.

Saudi Arabian Communication Norms: What Is and Isn't Questioned? 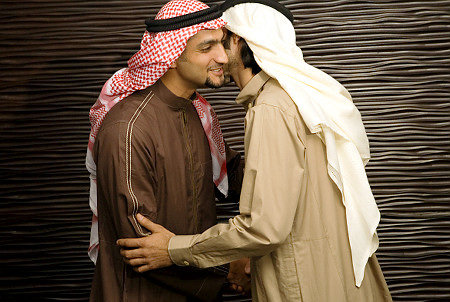 For example, when it comes to greetings in communication settings, there are certain rituals that take place that are not questioned by those involved.  In a male-to-male greeting, the two parties typically take part in a warm hand shake using their right hands, and then they embrace with two to three kisses on the cheeks of the other party.  Female-to-female greetings are similar, as they shake hands and kiss each other on the cheeks.  However, the major differences come in male-to-female greetings.  In Saudi Arabia, there is little to no touching between males and females (unless they are blood related or married), and even then, physical touching is held to a minimum.  This practice is not questioned by Saudis, as it is considered normal for women to be seen as socially inferior.  Women must obey male authority figures, and this relationship is seen in communication rituals in Saudi Arabia daily.  In conversation and ever day, eye contact between a male and female can be misinterpreted.  Therefore, most women tend to avoid eye contact with males.  Additionally, women are not supposed to speak out against the male authority figures.

When talking with Shoaa and Rida, Kristin Stevenson and I often questioned why Saudi Arabians acted in certain manners.  During Skype session number three, I talked with Shoaa about cultural history.  I asked her about the way she communicates with others, and why these communication rituals exist.  Nonchalantly, Shoaa said that it was because of her religion.  As a Muslim, many of these rituals are a way of life, and are therefore not questioned by the people of that religion.  In general, I believe that Americans are raised to question authority.  We learn about the American Revolution, and how we should not accept something for what it is unless we know why something is the way that it is.  In Saudi Arabia, these actions are not questioned, but rather just accepted by all as the way of life.  Shoaa, even as a woman with less rights and privileges than men, seems as happy as can be.

Knowing about these customs before traveling to Saudi Arabia could be very beneficial.  These traditions and rituals are a way of Saudi life, and questioning them would be like Saudis questioning Americans on why we physically greet both sexes.  It is the norm of American life, just as these norms are not questioned in Saudi Arabia.

According to Merriam-Webster's Dictionary, the term "Veracity" is defined as "the devotion to truth, or the power of conveying or perceiving truth."  Veracity is often seen as the fine line between honesty and deceit.  Are people being completely truthful with others?

To many Americans, the way that Saudis communicate could come off as dishonest.  Because of their indirect style of communication, Saudis could be seen by Americans as "beating around the bush" or avoiding confrontation, which is a sign of dishonesty or that someone is hiding something in America.  However, through the Islamic religion, Saudis are taught that honesty and truthfulness should be highly regarded by all.

Veracity could be communicated in multiple forms.  Veracity could be seen through mass communication, such as television shows, news channels, newspapers, and other media outlets.  Veracity could also be seen in daily communication between individuals, whether that be at work or at home.  At home, women, because they are supposed to answer to the male authority figures, are very honest and transparent when it comes to communication.  When talking with Rida and Shoaa, they were very open and honest with me about a number of topics.  While a lot of the honesty could have come from the fact that conversation was necessary for class, I saw it as part of their culture to be open with people on a personal level.  Shoaa shared with me her thoughts on family, working, socializing, school, and other things.  She even shared with me some of her personal secrets, to an extent.  She showed me her "hubbly-bubbly," or hookah machine, and told me about how she smokes without her mother knowing (coincidentally, it is taboo for women to smoke in Saudi Arabia).  She even talked to Kristin and I with a sense of honesty that Americans are not used to.  She told me that I should get a haircut, which shows that she was unafraid to tell me to change my physical appearance, something that many Americans are afraid to do.

Rida, on the other hand, opened up about her marriage and personal life.  While Americans are often tentative to talk about personal relationships with strangers, Rida, originally of Pakistani descent, told Kristin and I about her marriage without hesitation.  She talked about how the marriage took place.  Instead of the typical love story that most Americans are used to, Rida talked about the arranged marriage aspect, and how she and her husband had a mutual "liking" of each other, "so they just went with it."  The very "matter-of-fact" way she spoke about this personal aspect of her life was a bit startling, as she was completely honest and straightforward.

When traveling to Saudi Arabia, it should be noted that while most communication will be indirect in nature, people will be very honest and truthful with you.

When talking with Shoaa and Rida, I came to realize that our senses of humor were not too different by any means. While I was more cautious with the way I joked with Shoaa and Rida, we were all able to find situations in which we could laugh with each other.  While Americans have a wide range of senses of humor, I chose to try to base my humor off of what I saw that humored Rida and Shoaa.  Personally, I love sarcastic and dry senses of humor, but I was afraid that, due to the different tones and word usages that come with dry, sarcastic phrases, Shoaa and Rida would not understand the sarcasm, and take whatever I said literally.  Yet, I was still able to find certain topics that all of us found to be funny.  Shoaa was able to laugh when talking about family members and Facebook, and how they can be annoying by posting and commenting on our activities.  Rida and I, on the other hand, were able to connect our senses of humor through American movies like "Dumb and Dumber" (her dad is a huge Jim Carrey fan) and other movies.  Yet, because Shoaa and Rida learned English as a second langauge, it can often be difficult for them to joke comfortably in that lesser-known language.  Slang terms are unknown, and the comfort level is lost when communicating in that second language.

With the advances in technology, and the growth of social media and online videos, Saudi Arabians have been pushing the envelope when it comes to humor.  Ahmad Fathaldin and Fahad Albutairi are two young Saudis who have used the popularity of YouTube to create their own comedy shows targeted towards Saudis.  Their comedy is accepted, as they often try to avoid taboo topics like politics, or capitalize on the taboos by shedding light on the dark subject matter.
While non-Arab speaking people will not be able to understand this comedy show, similarities to Saturday Night Live and other famous sketch comedy shows are easy to spot.  These shows are examples that, although Saudis may be seen as more conservative, quiet persons, they are able to step out of their comfort zone and joke about taboo subject matter, and make people laugh in doing so.