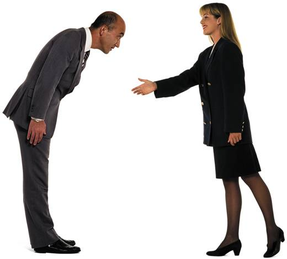 “Human beings in the course of a lifetime incorporate literally hundreds of spatial cues.  They imbibe the significance of these cues like mother’s milk, in the context of their own culture.  Just as a fragrance will trigger a memory, these cues and their associated behaviors release unconscious responses, regulating the tone, tempo, and mood of human transactions”(Hall169).  In order to be the most effective communicator as possible, it is ideal to match the person you are communicating with.  This makes them feel more at home and comfortable.  It is important to be aware of all aspects of communication including the pace in which you talk, you do not want to be too fast or too slow.  Also the inflections in your voice, the facial expressions you make, your hand gestures, everything conveys communication and makes a big difference.  With all of this, space is a very important aspect.  If someone is not maintaining normal distance for communication, being too close or too far away can hinder the communication interaction and cause separation internally.

“Since most people don’t think about personal distance as something that is culturally patterned, foreign spatial cues are almost inevitably misinterpreted.  This can lead to bad feelings which are then projected onto the people from the other culture in the most personal way.  When a foreigner appears aggressive and pushy, or remote and cold, it may mean only that her or his personal distance is different from yours.  Americans have strong feelings about proximity and the attendants rights, responsibilities, and obligations associated with being a neighbor.  Neighbors should be friendly and agreeable, cut their lawns, keep their places up, and do their bit for the neighborhood.  By contrast, in France and Germany, simply sharing adjacent houses does not necessarily mean that people will interact with each other, particularly if they have not met socially.  Proximity requires different behavior in other cultures (Hall169).”

Adaptation to cultural space can be very difficult if the culture is much different from your own.  For example, I talked to Ohanes Khacherian, who is a student at Hope College from the country of Jordan said that there was a lot he had to learn during is adaptation process.  One thing that was completely different in the American culture than Jordanian culture he said was walking down the street and approaching people.  In Jordan, most people look down and don’t look at anyone when they are traveling.  If they decide they want to stop and say hello to someone it is not a casual 30 second interaction, but often a 30 minute dialogue.  Ohanes explained that he was surprised to find the difference in this in the United States.  In the United States it is completely acceptable to pass by someone you know and just say hello and continue walking.  You are not accepted to talk with them for an extended period of time.

How far is your cultural distance?

Cultural distance can look differently depending who you talk to and their international experiences with other cultures.  There are ways that get you closer and further away from a culture.  For example, knowing another language, studying abroad, or knowing someone from another cultural background can all decrease cultural distance.  Other ways to create more space between you and another culture is through stereotyping, ignorance, and neglecting to find interest in a culture.  By creating close connection to a culture, you are able to broaden your scope of not that just culture, but you are probably more likely to accept or relate to other cultures different from your own just because you have that experience.  By distancing yourself, you are neglecting to connect with a culture that is different than your own that is making you even more close minded and not allowing you to learn and grow through the experience.
Sources:
Hall, E.T. & Hall, M.R. Key concepts: Underlying structures of culture. In J.N. Martin, T.K. Nakayama & L.A. Flores (Eds.) Readings in intercultural communication: Experiences and contexts. (pp. 165-171). USA: The McGraw-Hill Companies, Inc.