Breeze of the Dying 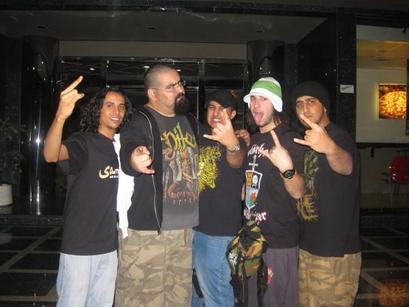 The Bandmates, from Myspace
Breeze of the Dying is one of the more well-known Saudi Arabian bands, at least stateside. They are considered a deathcore band, with melodic death metal and metalcore influences (Breeze of the dying, 2006).

The band is originally from Jeddah and formed in 2006. Interestingly enough, despite Saudi Arabia's stricter government controls, there is a burgeoning heavy metal scene led by Breeze of the Dying. Included in an episode of MTV's True Life in 2009, the documentarians followed the band's attempts to get gigs and promote shows in Saudi Arabia, where heavy metal music is widely considered by government officials to be sacrilegious and associated with worshipping satan (Crowcroft, 2011, March 6). The band also struggled with recording and mixing tracks, because there are no studios located in Saudi Arabia.

The band's profile skyrocketed after the showing of the episode, with U.S.-based metal bands like All Shall Perish and Wings of Plague throwing their support behind the rockers, but not all was well in their home country. After a show in Riyadh the organizers of the show were arrested and deported for the alleged mixing of sexes, and this became the last show Breeze of the Dying ever played in their hometown (Crowcroft, 2011, March 6). As of 2011, they were mixing their latest album and have put out a couple of EPs since, but are still unsigned as of 2012.

Crowcroft, O. (2011, March 6). This is not the music of the devil. Retrieved from http://www.rollingstoneme.com/index.php?option=com_content&view=article&id=111