Territory, Power, and the Workplace

Photo by Brianna Schmall
Cultural space defines culture, but at the same time, certain cultures define power and have territorial instinct that affects cultural space and the way or place people situate themselves.

Territory is something you must be very careful of when entering a culture that is foreign to you.  Not only could it be offensive to invade someone’s territory in a specific culture, but we must always be cautious of personal feelings about space and territory.  Space can mean something different for everyone and if you invade that space, you could find yourself in some trouble or an unfortunate communication interaction. 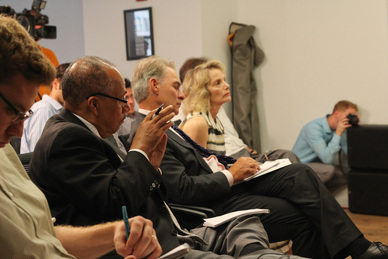 Photo by Brianna Schmall
Personal space and how people perceive it needs to especially be monitored closely in the workplace.  Just because an interaction between two people might be considered appropriate outside of the office, this does not mean the same applies for during work hours.  Being in a professional working setting puts a whole different label on cultural space and how you use it.  Getting too close to a coworker mentally and physically can get you into some big trouble.  In the United States for example most companies take this very seriously.  Getting too close either on an emotional or physical level unrelated to a serious intimate relationship is considered inappropriate.  Companies have harassment policies and company policies that relate to appropriate and inappropriate communication interaction in the workplace.  Because there has been so many issues in the past and the fact that there are still issues, companies do not mess around with policies like this and are very strict about how people interact with one another and the proximity of their space.  An example of the difference between in and out of the office would be if a woman was very good friends with her boss.  Outside of the office they hang out, hug when they see one another and have a purely platonic relationship.  If the boss and the women were seen hugging in the office every day when they saw each other, this would be considered extremely inappropriate in the United States.  Along with personal space that is seen in different cultures, there is an also subconscious use of space that communicates territory and distance from one another in the workplace.  “Space communicates power.  A corner office suite in the United Sates is conventionally occupied by “the brass,” and a private office in any location has more status than a desk in the open without walls” (Hall168).  You will typically see a CEO of a big company have a very large office space of his or her own, that office space probably includes a large desk in which they sit in, creating even larger space between them and whoever comes in and talks to them across the desk.  This common reality is subconsciously separating the CEO and the people underneath in the company.  By having a larger office the CEO is communicating that they are higher and that is why their space is different from the others.  “In Germany and America business, the top floors are reserved for high-ranking officials and executives.  In contrast important French officials occupy a position in the middle, surrounded by subordinates; the emphasis there is on occupying the central position in an information network, where one can stay informed and can control what is happening” (Hall 168).  Even though the location of office space may vary from culture to culture, one thing that seems to stay consistent is the amount of space.  The higher up, executives in the workplace often have bigger offices than those who are underneath or of lower status.  This is seems to stay universal among most cultures.  In Saudi Arabia this same fact is true.  Haya Hashim, a student at Effat University in Saudi Arabia explained that office space, especially for employees that are of higher rank have offices that are large and luxurious.  The CEOs and executives are usually placed on the top floor of an office building, just as it’s seen in the United States.  Haya said that even though the office space of the higher is always nicer, other employees do not seem to have it so bad either.  Office space is lavish and comfortable fairly frequently throughout most offices in Saudi Arabia in comparison to the United States where some companies have much greater office space than other companies.  Haya explained that once you see an office space of one company, other companies, you will see are similar.  So from her perspective the power distance between people in a company in Saudi Arabia is not very far.  Whereas in the United States most large companies and corporations have a large power distance between the employees and the higher ranking executives in the company.
Sources:
Hall, E.T. & Hall, M.R. Key concepts: Underlying structures of culture. In J.N. Martin, T.K. Nakayama & L.A. Flores (Eds.) Readings in intercultural communication: Experiences and contexts. (pp. 165-171). USA: The McGraw-Hill Companies, Inc.