The Significance of Family Across Cultures

Within every society, family plays an extremely important role in maintaining culture and passing on the norms and values a specific nation holds. The behaviors that parents maintain, their beliefs, philosophies about the world, gender expectations and all of their values are enforced and passed on to their children. The family unit is vital for the development of children in many spheres because it serves as a model for children to learn how to properly communicate with people. This idea, known as the Social Learning theory, was developed by Albert Bandura. His theory stated that children learn many behaviors based on observation of those around them and then modeling after them. Since children are mostly around their parents, siblings and perhaps extended family up until they begin schooling, they learn the majority of communication skills, values and societal norms from their family.

Research has also demonstrated that family plays a significant role in what values children develop. A study across three generations done by Bengston (1975) showed that the values that children, parents and grandparents remain on the whole more similar than dissimilar. This is an important influence to note because even though peers and media have an effect on adolescents, it is ultimately their family that largely influences what they believe. If we consider all the different values that effect people such as political views, relationship values, religion, work ethic we can then begin to fully understand the impact that family has on a person throughout their life. Although the significance of family may be considered universal, the family dynamics and the beliefs which a family hold dear vary between cultures and within cultures. This section will examine the importance of family, explore different family structures and then highlight family dynamics and habits that are specific to Saudi Arabia. 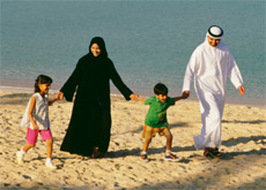