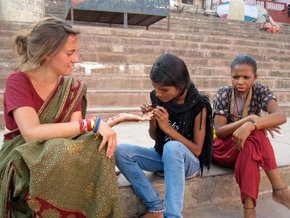 Delhi, India Photo by Elizabeth Joy Buns
Cultural space may look completely different depending on what gender you are working with.  In the United States, cultural space between opposite gendered people working together has some distance from same sex people working together, but is still fairly close.  In Saudi Arabia, there is a very large separation between genders.  This is seen in both professional and social settings.  Examples of this in Saudi Arabia is that it is very common for males to go to all male coffee shops.  Yes, in America there are gentleman’s clubs and gay bars, but from what Haya Hashim, a student at Effat University in Saudi Arabia explained to me, all male coffee shops and strictly male associations are very common compared to the infrequency of all male associations in the United States.  In Saudi Arabia, the male female interaction is much different from that of the United States.  Males and females do not typically look at each other, talk to each other much, or even participate in the same things.  The only reason a male would talk to a female is if they were interested in an intimate relationship with them or something more than just a friendship.  Men and women do not go to school together and do not work together typically in offices.  There is huge distance between males and females which creates a very interesting cultural space.

Males have an overall dominance in Saudi Arabia that has a huge effect on space.  Males dominate the workplace, schools, and even the transportation system.  In my opinion Saudi Arabia is very behind when it comes to women’s right and gender equality, but to people who live in Saudi Arabia it is just what they know and it’s normal.  Women can still work, but they have a much little variation in job choice.  According to Haya, they are able to do the same things as men, but when you sit down and compare their jobs they actually look much different.  Women can go to school to do the same things as men, but in the end they do not move up in the company at the rate that men do or once they have kids end up staying at home anyways.  Unfortunately, men and women have a space created between them in the workplace in the United States as well.  In female dominated jobs such as social work, teaching, and nursing, when men are in those roles they are able to take advantage of what is called the “glass elevator” in which males are the minority because they are in a female dominated job, end up moving up in the company quicker and are recognized as a minority and benefit greatly from it.  On the contrary, when women suffer from the “glass ceiling” which is "the unseen, yet unreachable barrier that keeps minorities and women from rising to the upper rungs of the corporate ladder, regardless of their qualifications or achievements." (Wikipedia).  United States seems to be better than most countries in the area of gender equality, but they still have a ways to go.

Women and men also make space between each other in the way they dress.  Even though it’s considered a “choice”, in Saudi Arabia women typically where the traditional headpiece on their head called hijab in front of men, while men dress in regular pants and shirts.  Women stay very conservative and from Haya’s words says that the way she dresses is “for the men”.  She said that is the reason she has to stay conservative so that she is respectful of men.  This saddened me for a moment, but after talking more to Haya, she is proud to wear a hijab and she wants to.  She doesn’t wear it in her house at home, but she chooses to wear it when she goes out.  Why is it that I felt bad for her? Why did this sadden me?  If she’s happy to wear a hijab, then she should.  I think the reason for me feeling this way is because wearing a hijab in the United States is pretty uncommon and I associate that with something that might be uncomfortable.  Haya sees it as something that is very comfortable and common, and because of that I shouldn’t feel sad for her because she is happy and that’s the decision she makes every day when she goes out of the house. 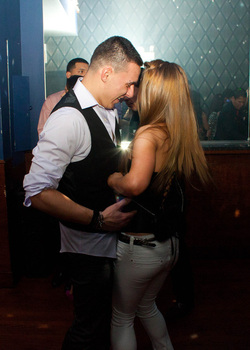 Photo by Brianna Schmall
In comparison to Saudi Arabia, the United States is much more liberal in the ways people of the opposite gender interact with one another.  It is very typical for men and women to interact with each other closely in bars, restaurants and other public places.  Whether or not the two people interacting know each other or not does make a difference in the way they might communicate or interact, but it also depends greatly on the people and what type of personality they have.

The website "Culture Crossing" proved to have interesting insight on basic communication skills that are considered appropriate and inappropriate in different cultures and countries.  The United States and Saudi Arabia were very different.  For the subject of "Greetings between men and women" in Saudi Arabia it said "there is little to no touching between men and women during greetings in public, unless related by birth or marriage, even then it tends to be minimal".   In the United States, however, the description for greetings between men and women is "at first meeting a regular handshake will do.  Light hugs are common between good friends and family".  Another interesting aspect of culture I looked at was eye contact.  Saudi Arabia description for eye contact is "Direct eye contact is acceptable between men and between women. Indirect eye contact can often be mistaken for ignoring.  Indirect to no eye contact is best between genders".  And for the United States is, "Americans value direct eye contact during conversations.  IT is viewed as a sign of respect and interest in what the person speaking is saying.  Staring is considered rude and to be avoided.  Especially in the larger cities".

After seeing the difference in space and interaction between genders, I looked at gender issues in both the United States and Saudi Arabia.  Saudi Arabia proved to be very much behind on gender equality issues and I began to wonder if everything Haya said was necessarily true.  Gender issues stated, "while many Saudi women hold jobs yet segregation is the norm, i.e. female doctors see only female patients.  This is true when it comes to educational, medical, religious and other service institutions.  Women are not allowed to drive or ride bicycles on public roads.  Western business women tend to be accepted but with a great deal of reservation.  It's best to avoid direct eye contact with men.  A simple smile can be severely misinterpreted.  Women are expected to be very feminine, and obey male authority. They are expected to grow up, and become wives/mothers.  It is unacceptable in most social circles for women to voice their opinions about many things or question their male guardian’s authority. These roles are generally expected of foreign women as well".  The United Sates description for gender issues said, "Americans value equality and work opportunities for women are varied and available yet earnings may still be lower.  Many American families are dual income with both the man and woman working".

While Haya might have truthfully believed the United States and Saudi Arabia were very similar, I learned quickly that there are still some big differences.  It is not my place to say whether a certain culture is right or wrong in this citation, but they are different from one another and they can both learn from one another as cultures and as countries.